A bit of news regarding TNA and the future of the company. TNA’s social media accounts as well as TNA President Dixie Carter’s all went dark as a timer started on their website counting down to a big announcement of some sort. For TNA fans, it’s the announcement that they’ve been hoping for. It was announced today that TNA have managed to seal a new television deal with Pop.TV which will begin on January 5th 2016.

LOS ANGELES, CALIF. – Nov. 19, 2015 – Get ready for #ImpactOnPop. Pop, a network that celebrates the excitement of being a fan, will soon become the exclusive U.S. television home of IMPACT WRESTLING, the hard-hitting, high-flying global sports sensation enjoyed by millions of fans around the world.

Pop will premiere IMPACT WRESTLING with a live two-hour, action-packed broadcast on Tuesday, Jan. 5, 2016, and the show will continue to air every Tuesday night at 9:00 PM, ET/PT. The show features some of the biggest stars in professional wrestling, including Jeff and Matt Hardy, EC3, Kurt Angle, Bobby Lashley, The Wolves, Eric Young, Tigre Uno and Gail Kim.

“Wrestling has been a fan-fueled staple since the ‘50s, and continues to be some of the most-watched appointment television today. The die-hard fandom and extraordinary passion surrounding IMPACT WRESTLING captures the spirit of Pop as a network that celebrates fan-driven entertainment and excitement,” said Brad Schwartz, President of Pop. “We’re committed to this new partnership and psyched to bring the show’s loyal fans a dedicated night to watch their favorite show on Pop every week.”

IMPACT WRESTLING is a strong global brand seen on networks in more than 120 countries around the world and broadcast in 17 languages. Its fans are some of the most devoted and socially active in sports, with more than 15 million aggregated social media followers and nearly 700 million video views on YouTube, making it the seventh-most-viewed sports channel, ahead of MLB®, NHL®, MLS® and FIFATV®.

“Pop’s enthusiasm for our partnership and the network’s fan focus is a perfect fit for our company,” said TNA President Dixie Carter. “Wresting has always been at the forefront of pop culture with the most passionate, loyal fan base. We’re thrilled to be in business with Pop and to bring IMPACT WRESTLING to more than 80 million homes.”

This is obviously such a huge boost for TNA as they’ve managed to secure a new deal with their time at Destination America coming to an end. It was wondered whether TNA could survive without the TV deal but as it turns out, they were able to get a deal together.

The new day for TNA is Tuesday which I actually think works out for the best as there’s no other wrestling on TV that day I think. On Wednesday, they had competition from ROH and NXT. At least here, they don’t have to worry about needing to counter-program. I do question the decision for TNA to be two hours long as I’m more of a fan of one hour wrestling shows than two. Three hours of RAW is an even greater struggle!

It’s good news for the wrestling industry in general as it gives wrestlers more of an incentive to stay in TNA and for more sponsors and partners to get involved. I would never wish for a wrestling company to go out of business at all and I am all for this deal going down. 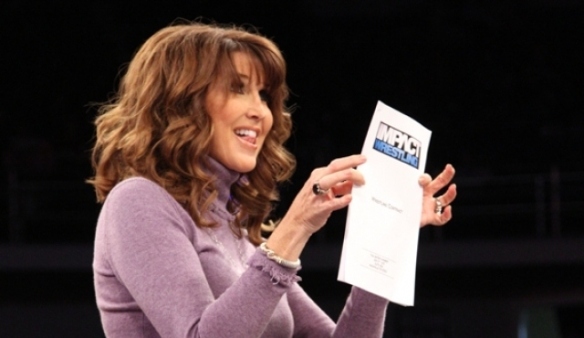 A lot of people will say that it’s just prolonging the inevitable but this does give TNA a lot of opportunities to seriously go through the roster and having a serious revamp to make sure that they’re at least more prepared if a similar deal of losing a TV contract happens again. It may keep them going for a while but Dixie and the rest of those running the company cannot rest easy. It’s not all rainbows and sunshine just yet.

It’s funny that TNA’s deal was spoiled an hour before the countdown hit zero as the video was suddenly changed from “private” to “unlisted” which meant that a YouTuber was able to save the video before TNA changed it in time! Bit of a blunder but at least the deal is out there now!

I do have a problem with a lot of the criticism given to Dave Meltzer over his reporting of the whole deal as he was the first to initially report that Destination America was not renewing Impact. Eric Young came out and tweeted on previous reports about Impact not being renewed by Destination America.

Wonder what the "journalist" will use to make this a negative! So much for being canceled in OCT. #scumbags #notjournalist #TNA2016

I really don’t think this was the right route for Eric to take. As a former Multimedia Journalism student in my own right, I don’t think there was anything fishy about the report Dave wrote about TNA. Dave was actually the first to report about TNA getting the deal with Destination America and he’s an esteemed reporter with many years of experience and knowledge on wrestling.

Eric going out on Twitter, trying to rub it all in and taking shots at reporters is just not going to make the company look good in the eyes of the public. A lot of the wrestlers are taking the high road and just talking about how great the deal is and how big a breakthrough it is for TNA. Rockstar Spud actually came out in defence of Dave on Twitter.

Not true. I personally am calling out TROLLS @davemeltzerWON has every right to say what he wants. It's his job! https://t.co/PBprelFSAU

So big news for TNA and this I think would at least keep the company going for a bit longer and give them time to come back stronger than ever. I’m all for this and I wish that they use this new deal wisely.

One thought on “TNA Announces New TV Deal With Pop.TV”