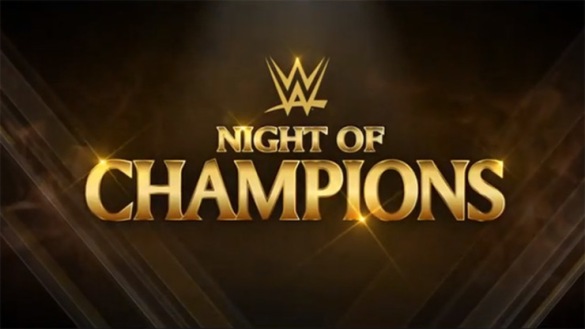 Welcome to the Armbar Express’ Night of Champions review. It was an important PPV for the company and I thought they delivered. There was a lot of pressure on Seth Rollins to perform, having to take part in two main-event likes matches for the WWE World and United States title. Anyway let’s get too it.

Ryback (c) vs Kevin Owens for the Intercontinental Championship 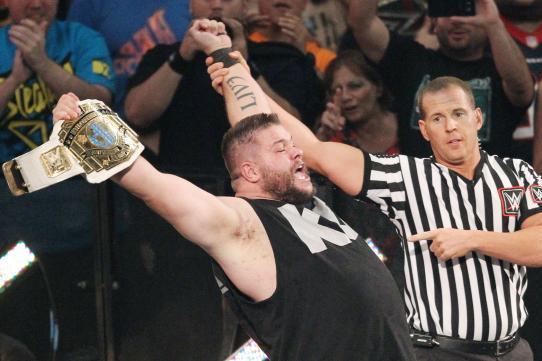 The fans were well behind Owens for this one. Ryback got a decent reaction but it was mostly pro-Owens for this match. Ryback pressed Kevin Owens over the top rope in what was an incredible feat of strength. Kevin was working on Ryback’s arm throughout. Ryback’s selling of the pain done to his arm was quite evident. It was evident to the point where Ryback shouted, and I mean shouted, “Referee, my elbow!” Ryback made his comeback. I didn’t like the finish to this match. Firstly, Ryback went for his Shell-Shocked but his arm supposedly “gave out” and Owens threw him into the post. Ryback went for the Shell-Shocked again but Owens raked his eyes and just rolled him up for the pin. What was the point in all the damage to the arm if it didn’t even lead to the finish of the match? It also didn’t help matters that Kevin Owens won the title with a roll-up. No finishers were hit in this match at all. Maybe Kevin didn’t think he’d be able to pull-off the powerbomb on Ryback, so this finish was set up. However, a match like this without any finishers being hit just makes the match look so weak. Considering there was a title change involved, the finish hurt the title’s prestige for me. It also makes Ryback look weak having been beaten by a roll-up. I thought it was a fine match which I think could have been helped with a strong finish.

I’ll probably do a separate write-up on WWE doing Taker/Lesnar III at Hell in a Cell and what I think of it. It’s definitely a surprise as I was expecting the third match to take place at Wrestlemania. All I can assume is that Vince must have other plans for Lesnar and Taker with regards to Wrestlemania 32.

Dolph Ziggler debuted some new tights with Lana’s face on his crotch. JBL finally mentioned what many of us have been thinking about this storyline… JBL said that Rusev was the victim of this storyline involving himself, Ziggler and Lana. Jerry Lawler asked how Rusev was the victim and JBL’s response was “because Dolph Ziggler is a player.” Out of all the reasons JBL could have came up with that could have been a legitimate gripe, JBL went with that! I just laughed.

There was “We Want Lana” chants, which shows you just how interested the fans were in this match. I love how during this match, they were showing the tweets about the Brock Lesnar “Go To Hell” tour announcement. They picked out three tweets with the last one being about the Hell in a Cell match! You’d think the Stone Cold podcast would have been minor compared to BROCK LESNAR VS UNDERTAKER!

You may have noticed that I haven’t wrote a thing about the actual match between Rusev vs Dolph Ziggler. The truth is, this match was pretty boring. There was a spot where WWE succeeded in their quest to make Rusev look like a complete fool. Rusev hit the super kick but Ziggler clearly kicked out. However Rusev was running around as if he’d won the Olympics, thinking he’d won the match! You’d think someone like Rusev would understand the rules of the match…

The finish was that Summer was thrown out for getting on the apron. Summer angrily threw one of her shoes, but ended up hitting Rusev in the head. Ziggler hit the Zig Zag and PINNED him. Not only did Rusev look SO BAD in this match, the finish was a bit illogical. Surely the referee would have called for a disqualification when Summer threw her shoe and it hit Rusev. Rusev should have won the match! Yeah, the finish was no good. 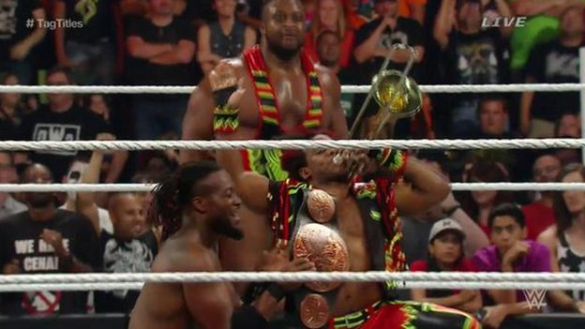 JBL was talking about the 3D. He said that 3D had never been kicked out of before. He than took a long pause, thought about it and then said “in WWE”. I’m pretty sure that Jeff Hardy once kicked out of the 3D in WWE and I know Chris Sabin kicked out of the move in TNA. So JBL really does need re-check his facts a bit!

I loved Big E’s rhythmic headlock and just Xaiver Woods on the trombone in general! I hope they never take the trombone away from Xaiver! JBL compared the New Day to Destiny’s Child and compared Xaiver’s haircut to Leonidas’ from 300! This was a very fun tag team match. What was funny was Big E went for the cover on Bubba Ray off a splash onto the apron. Bubba kicked out by D-Von still felt the need to come in and push Big E afterwards anyway! Xaiver started playing the Rocky theme which was pretty amazing!

The match ended in a disqualification after Xaiver broke up the pin. I think compared to all of the other great tag team title matches on PPV this year, this was one of the weaker ones. Felt more like a standard tag team match on RAW to be honest. The New Day, who had been petitioning to save the tables, then decided to get the tables themselves. It backfired, as Xaiver was put through a table with a 3D.

Nikki Bella (c) vs Charlotte for the Divas Championship. If Nikki got counted out or disqualified, she would lose the title 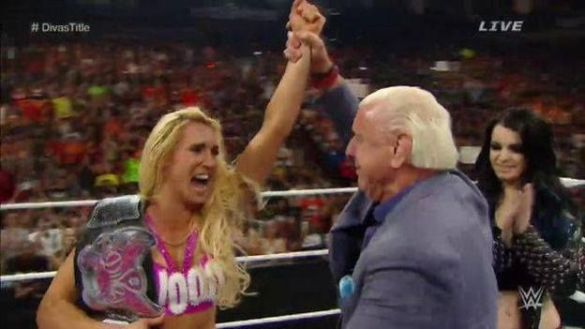 Nikki worked on Charlotte’s leg throughout the entire match. This was similar to Sasha Banks working on Bayley’s hands at NXT TakeOver. The difference being that Sasha’s offense in that match was a lot more effective than Nikki’s here. There was a spot where Nikki jumped off the top rope just to chop block Charlotte, which I thought looked pretty daft. Brie Bella and Alicia Fox tried to pull away the ropes from Charlotte when Nikki had a Single Leg Boston Crab locked in. Nikki shouted at them, as she didn’t want to get DQ’d. This led to the brawl on the outside between Paige, Becky, Alicia and Brie.

Nikki tried to lift up Charlotte for what looked like an exploder suplex but she just dropped Charlotte and went for a cover. It ended up looking like Aksana’s finisher but worse. The finish was that Charlotte caught Nikki was a spear off the top. A great move in theory, but not pulled off too well in the match. Then Charlotte just locked in the Figure Eight Leg Lock and Nikki tapped out.

Ric Flair was awesome in a backstage segment with Charlotte and the rest of PCB. It was a very touching moment with Ric calling her champ. A great-feel moment for the Charlotte.

I was reading a few articles before this match, with many people having high expectations for it. I wasn’t sure. I figured it would be a decent six man tag team match but I didn’t think it’d blow my mind or anything. Never really knew what to expect to be honest! Some dude jumped into the ring from crowd just before Reigns and Ambrose’s partner came out! WWE’s security really need to step up their game!

Chris Jericho was the third man to team with Reigns and Ambrose. I was not expecting this but I was more than OK with it! There’s actually a bit of continuity involved, as Jericho and Wyatt feuded last year. So the commentary’s speculation of it being someone that might have unfinished business with Bray Wyatt actually came to fruition!

It was a fun little six man tag team match. The match ended when Jericho passed out to Braun’s submission hold. I’m pleasantly surprised by the WWE’s decision to put the Wyatts over. I really didn’t think they would but I’m glad that they did. This was a very sound six man tag team match and I’m happy with the result. Probably the best match of this show up until this point.

The fans started going a wave… IN THE MIDDLE OF A SETH ROLLINS VS JOHN CENA MATCH. Some fans can just wind you right up. I don’t mind wrestling fans having fun, but this is a very big match. It’s one thing to hijack a match like Sheamus vs Randy Orton which can get tiresome after so many matches, it’s another thing to hijack a match that was probably going to be the best match of the night.

Cena pulled off the sunset flip successfully this time. This was a really good match. A very nice back and forth match which saw Cena win the US Championship. This was no doubt the right decision by WWE. If Cena goes back to opening up the John Cena Open Challenge on RAW, I’m all for it.

Sting went for the Scorpion Death Lock and Scorpion Death Drop right away but Rollins was able to get out of it. They battled outside for a while until Seth pushed Sting through the announce table which was quite a hard hitting spot. Sting went for a dive from the top onto Seth Rollins on the outside which got a “Holy Shit” chant. Sting hit the Scorpion Death Drop but Seth got his foot on the rope. It looked like the referee was going to call the match off when Sting got hurt from a powerbomb but it kept going. Sting locked in the Death Lock again but Seth got to the rope. Sting locked it in again but Seth countered it into a pin in order to win the match.

God damn, good match. Very good storytelling and the two put on a great match. I think it was for the best that Seth beat Sting clean, but I’m wondering how this will effect Sting in the long run. He’s now 0-2 in his WWE career. I guess we’ll have to wait and see.

Sheamus was looking to cash in and hit the Brogue Kick but was interrupted by the return of Kane. Kane turned his intentions to Rollins and hit  a chokeslam. Kane then hit the chokeslam on Sheamus. Kane hit the tombstone to end the show. 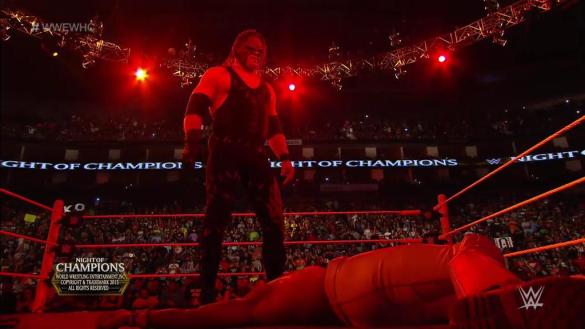 I thought this was a really good ending to the PPV. I thought the PPV itself was good. There wasn’t anything really good other than Seth Rollins’ two matches. The six man tag team match was good. Everything was fine. Some of the finishes hurt a few of the matches. But, solid PPV. A very solid follow-up from Summerslam and a great ending.