Welcome to the Armbar Express’ Night of Champions 2015 predictions. This is very important PPV for WWE. Coming off Summerslam, the pressure is on for WWE to deliver. It’s not that they’re lacking in star power either. Usually, it’s the case where the WWE programming takes a hit as all the stars are off television. While WWE are without the likes of Undertaker and Brock Lesnar, they’ve got the talent to put together a quality show. The Dudley Boyz have returned to take on the tag team champions and they’ve got a legend in the running for the WWE World Heavyweight Championship.

Many questions will be answered in Houston on Sunday. Will Nikki Bella’s historic title reign come to an end? Will the Dudleyz end the glorious title reign of the New Day? Will Kevin Owens capture his first title as part of the main roster? Will the Rusev and Dolph Ziggler rivalry finally come to an end? Who will Roman Reigns and Dean Ambrose’s partner be for their six man tag team match against the Wyatts? And lastly… how many titles will Seth Rollins have by the end of the night? Will Sting make history at Night of Champions?

Background: Dolph Ziggler returned on RAW to challenge Rusev for a match at Summerslam. The match ended in a double disqualification as a brawl developed between Summer Rae and Lana. Their rematch on RAW eight days later ended pretty much the same way, except that Dolph Ziggler won by disqualification. After the match on RAW, Summer Rae would go into Dolph Ziggler’s locker room and come out screaming as Dolph Ziggler had his towel on. Summer claimed that Dolph had come onto her but Dolph denied it. This led to a MizTV segment on SmackDown! where Lana and Summer brawled once again. Lana ended up getting a legitimate injury as Rusev forgave Summer Rae and blamed Ziggler on television. This would lead to a rematch being announced for Night of Champions.

What Should Happen?: I’ve talked about this angle so many times. I’m not a fan of it AT ALL. If you want to read my thoughts on it, click on this link. The biggest issue is that it’s not helping the careers of Ziggler or Rusev. Therefore, there’s not good reason for having it on television anymore as no one is benefiting from it (well except Summer Rae I guess). I’d pick Rusev to win this match and I hope this storyline is wrapped up. If it were me, I’d have it somehow revealed that Ziggler and Summer didn’t do anything. If Lana will be at the PPV, I hope it’s revealed that LANA actually had an affair… with RUSEV! That way, Rusev and Lana are back together and Lana gets a load of heat off the turn.

Ryback (c) vs Kevin Owens for the Intercontinental Championship

Background: Ryback retained the Intercontinental Championship at Summerslam while Kevin Owens defeated Cesaro. Kevin would then begin to target Ryback on an episode of SmackDown! Following a few confrontations and an actually decent segment last week on RAW, Kevin Owens vs Ryback for the title was announced for the PPV.

What Should Happen?: Ryback’s title reign has been hurt for a few reasons. He started feuding with the same people for three months when he first became champion. He was also injured in the middle of that program so Ryback’s really not had a chance to really establish himself as a top champion as he’s not had many challengers. I’d like to keep the belt on Ryback but Kevin Owens is going to look so bad if he loses clean to Ryback at Night of Champions. If it were up to me, I’d have Ryback pin Kevin but with Kevin’s foot on the ropes. This could lead to a nice little No Holds Barred match at Hell in a Cell where Kevin could win the title. If Kevin were to win, I’d like to see him actually chase the title. I think it’d make Ryback look crap if he were to lose to Kevin in his first title defense against him. Ryback wins, but due to a bad referee call.

What Will Happen?: Kevin Owens wins. I think that’s what WWE’s plans are for him in Houston. 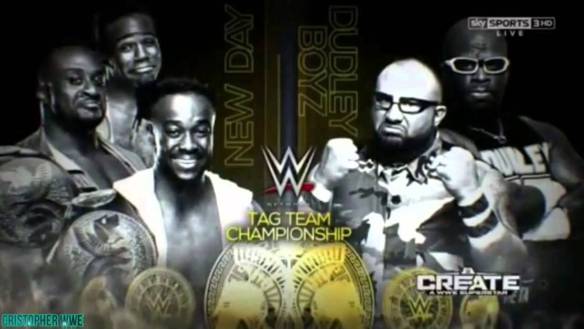 What Should Happen?: THE NEW DAY WIN! I don’t care if it is the Dudleyz they are up against. The New Day are the hottest thing going in WWE right now and it would be a shame to see that title reign end at Night of Champions. I love the Dudleyz but they really came back at the wrong time to be in line for a tag title run.

What Will Happen?: The New Day retain. I sense a DQ finish in the works, because I don’t think the WWE want the Dudleyz beaten clean in their first PPV match back.

Background: Dean Ambrose and Roman Reigns beat Bray Wyatt and Luke Harper at Summerslam. However, Bray brought in the Wyatt Family’s “Black Sheep” in order to turn the tide in their favour. Braun Strowman was introduced and attacked Reigns and Ambrose. A six man tag team match was made for Night of Champions with Dean and Roman needing to look for a partner. On RAW, Roman confirmed that they’ve found their partner and that they were going to kick their asses.

What Should Happen?: It’s been rumoured that WWE are planning on rushing Erick Rowan back so he can be the mystery partner. I hope that’s not the case. Firstly, I’d rather Erick come back when he’s 100% rather than him coming back and working hurt. Secondly, it wouldn’t make any sense for Dean and Roman to pick Erick as their partner. The last time Erick was on TV, he was teaming with Luke Harper. Wouldn’t Dean and Roman suspect that Erick could turn on them if he was the partner? If I had to pick who I think should be the third man, I think it should be someone from NXT like Finn Balor, Samoa Joe or Sami Zayn if he’s ready. Sami would be a great pick.

Regarding the result, I think the Wyatt Family need to pick up the win. They lost at Summerslam and it wouldn’t make them so weak if they were to lose two PPVs in a row.

What Will Happen?: I don’t see the Wyatts picking up the win with this mystery partner business. Roman and Dean’s team win.

Nikki Bella (c) vs Charlotte for the Divas Championship

Background: Stephanie McMahon called for a Divas Revolution in July, as the NXT women Charlotte, Becky Lynch and Sasha Banks were called onto the main roster. Charlotte and Becky teamed up with Paige to form the PCB and won a three team elimination match at Summerslam. According to Michael Cole, Stephanie McMahon said that the winners of the three team elimination match would get a chance at the Divas title. I can confirm that Stephanie never said anything like that. However, all three members of the PCB took part in a Beat The Clock challenge on RAW. Charlotte won the match to earn a title shot. She was given a title shot on RAW but lost via DQ. The Bella Twins had tried Twin Magic which ended up with Charlotte pinning Brie. However, Steph reversed the decision and Nikki retained the title. This meant that Nikki Bella would break the record for the longest Divas title reign of all time. However, Charlotte still has a title match at Night of Champions. If Nikki Bella gets counted out or disqualified, she will lose the title.

What Should Happen?: Nikki Bella retains and read my article on Charlotte at this link to see why.

What Will Happen?: Charlotte wins the title. From what I can gather from online reports, I think the plan still is for Charlotte to win the title. If that’s the case then WWE should have Nikki retain and make Charlotte chase for the title. However, I don’t see WWE doing that. I don’t think they have the patience to do that.

Background: Alright, here we go. Match #1 for Seth Rollins. WWE World Heavyweight Champion Seth beat John Cena for the United States Championship after interference from Jon Stewart… which still annoys me to this day. John Cena would come out two weeks later on RAW to invoke his rematch clause for the US title. This announcement meant that Seth would have to defend both the WWE World and US titles at Night of Champions.

What Should Happen?: John Cena wins. I left a comment on an article for SLTD Wrestling about this. John Cena is best served reigning as US Champion. If he regains the title and the John Cena invitational begins again on RAW, then it’s going to benefit everyone that challenges him for the belt. Cena needs the US title a lot more than Rollins.

What Will Happen?: Cena wins. No doubt in my mind that if Seth’s going to lose a championship, it’s going to be the US title.

Background: Sting returned on the RAW after Summerslam, declaring his intention of winning the WWE World Heavyweight Championship. Almost immediately, Triple H announced Seth vs Sting for Night of Champions. Sting talked about the WWE World title being the one title that has he’s never won. Sting also stole a statue dedicated to Seth Rollins and ended up breaking the statue. On last week’s RAW, Sting would make Seth tap out in a tag team match and gets all the momentum heading into Night of Champions.

What Should Happen?: Sting wins… via disqualification. Seth Rollins retains the title. I think Seth should be champion for a long time. It’s not going to hurt Seth that much if he loses. However, I think WWE have to build to the moment of Sting winning the WWE World title if that’s what is going to happen.

That wraps things up for the Night of Champions prediction. I expect this to be a big PPV for WWE. I really hope this does well as it has all the ingredients needed to being one of the best PPVs of the year if done right. If not, Houston… WWE might have a problem.