A few months ago, Kurt Angle stated in an interview that WWE weren’t interested in rehiring him after he enquired about rejoining the company last year. This got me thinking because Kurt Angle hasn’t been with WWE for nearly a decade now. It’s really hard to believe that Kurt has not been with WWE for so long but yet very active in professional wrestling with TNA. With that in mind… how would you bring him back? How much would he appear on television? How much of an impact would the former TNA star have on WWE programming a decade after his depature? How Would I Book… Kurt Angle’s return to WWE.

Now it’s important to note that we have to be a bit realistic with Kurt’s conditioning. Kurt’s stated in a number of “shoot” interviews that the perks of his run with TNA is that the scheduling for him is a lot less intense than if he were to be working full-time with WWE. Also, he’s getting paid a lot more to do a little less. So the idea that we should have Kurt Angle back on television full-time for the foreseeable future is out of the question. There’s no way Kurt could be fit and healthy enough to maintain a full-time schedule with WWE. Ask anyone who’s had to work full-time on the road for 300+ days a year for WWE. It takes such a mental and physical toll on your body. Kurt Angle is 46 years old for god’s sake. How on earth could he possibly work such a demanding schedule?

Having said that though, Kurt’s still be working full time for TNA for last decade of his career. Granted, TNA’s schedule is a lot less demanding than WWE’s. However, Kurt’s still been able to work well and sufficiently enough to represent the company as it’s World Champion THIS YEAR! Watch his matches with Bobby Lashley for the TNA World Heavyweight Championship. Kurt can still go in the ring. So he can work in a competitive capacity.

I would recommend signing Kurt to a part-time contract as it would be more suitable for the Olympic Gold medalist. He can pick and choose which dates suit him best and their would be less strain on his body. But the thing is… how do you re-introduce him to the WWE Universe?

Granted, the fans know that Kurt Angle exists since he can be seen on the WWE Network for just 9.99. He’s been an accomplished wrestler with WWE so he’s not unknown to the general audience. It’s not like Sting, who had never appeared for WWE before he joined in 2014. However, the WWE universe does need to get re-acquainted with Kurt just a little. He’s been away from the company for so long. So if he were to re-sign with WWE tomorrow, then I would propose re-introducing him to the WWE universe in a video game. More specifically… as downloadable content for the upcoming WWE 2K16 video game. 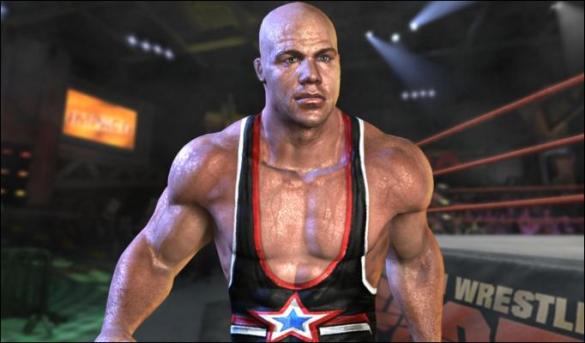 Whether the developers could get Kurt Angle completed quick enough to be DLC is debatable. However, if Kurt re-signed today, then the developes could possibly get Kurt done in time for Wrestlemania 32. Kurt’s re-introduction to WWE through a video-game could create speculation about the PPV itself. The fans would start to wonder why the WWE would release Kurt as a video game character just prior to the biggest event of the year. They might start to believe that WWE is actually preparing a surprise return for Kurt Angle. However, he does not come back at Wrestlemania. If he did, Kurt would be among a star-studded roster appearing at the biggest show of the year. It’s not really fair for Kurt to return when there are so many others being featured on the card. So I would hold of his return until the next night on RAW.

I think my first opponent for Kurt to feud with would be Rusev. Kurt Angle vs Rusev would actually be a pretty decent match for Kurt to work. Kurt would play the Pro-USA character against the Anti-USA Rusev. However, it would not be a match about Patriotism…

Rusev would (hopefully) be coming off a big win at Wrestlemania 32. He gets bragging and says there is not a man out there that could beat him. He therefore challenges whoever the WWE World Heavyweight Champion is to a title match later that night which the champion accepts. However, the champion should really be a face for this to work. Rusev gets DQ’d in their main event match but then attacks the champion. During the attack, he keeps shouting “Who’s going to stop me?” until we hear Kurt Angle’s theme song. Kurt comes out to stare down Rusev to end the show.

Kurt would come out the next week on RAW and declare that he’s here because he has something to prove. He’s been seeing a revolution in WWE with new stars from NXT and beyond coming to WWE and delivering like few others have. He then saw Rusev, who had been a powerhouse in WWE for years. He says Rusev is one of the nastiest he has seen and says that Rusev is someone he needs to prove himself against. Kurt’s says that he’s not fighting for America like he did in 1996 when he won Olympic Gold. He’s here to prove that after nearly a decade away from WWE, he can hang with the top stars of today. He challenges Rusev to a Submission match at Extreme Rules. Kurt says if he can’t beat Rusev, he will not appear on WWE television again. Rusev agrees and the match is made. In the match, Kurt makes Rusev tap out.

Rusev tapping out is rare. In fact, I actually think John Cena is the only man to do so since Rusev’s arrived on the main roster. But Kurt Angle making Rusev tap out shows that Kurt is just as good as he used to be. If Rusev’s won a big time match against a top face at Wrestlemania 32, then this loss wouldn’t be such a big deal. If you want to have Rusev get his redemption, simply have him win a rematch at Payback. I’d personally book a best of three in which Kurt ends up winning their third match at Money In The Bank. Much like Kurt’s feud with Samoa Joe in TNA, you’re not hurting either man to a great degree.

Then if you want to, Kurt can come back to feud with the likes of Daniel Bryan (hopefully), Sami Zayn, Kevin Owens and many more of the newest stars WWE has to offer. Because that’s exactly who Kurt would want to go up against. Kurt wants a challenge, so don’t have him feud with the likes of Triple H and John Cena because he’s already done that. Give him something new to work with. You’re also doing his opponents a favour by having them put on potential classics with a great worker like Kurt Angle. Who really loses?

There you have it. I would not have Kurt Angle come back and push him to the top or something. That would be pretty silly considering he’s 46 years old. However, given Kurt the freedom of working a less demanding schedule means Kurt can be utilized to help elevate your up-and-coming talent and make them legitimate stars. He’d be like Chris Jericho whenever he comes back. And it’s not like Kurt wouldn’t mind losing to these guys either. Just as long as you don’t give Kurt the same old stars from WWE’s past because no one wants to see that. Kurt can prove to be a valuable commodity in WWE and can help those he’s working with. It can also encourage other stars to step up their game considering what Kurt’s able to do at 46. Overall, Kurt’s return can have a positive effect on your roster and your television programming.

Have any suggestions for a How I Would Book? Simply tweet me at either @ArmbarExpress or @TomRobinson5199 on Twitter with your suggestions. Do also check out the rest of the content on my blog. I do a lot of other cool fantasy booking blog posts with my playthroughs of fantasy booking game Extreme Warfare Revenge. And there’s all sorts of other wrestling content as well. You never know, you might just like what you see!