At last, my TNA 2010 EWR series has arrived and we are kicking things off with a BANG! Destination X!

I made a load of signings, up-and-comers and veterans which you will see gradually appear on the show as they build themselves up on TV.

A lot to play with in time, but right now I want to make use of the most over guys on the roster. So… let’s get to it! 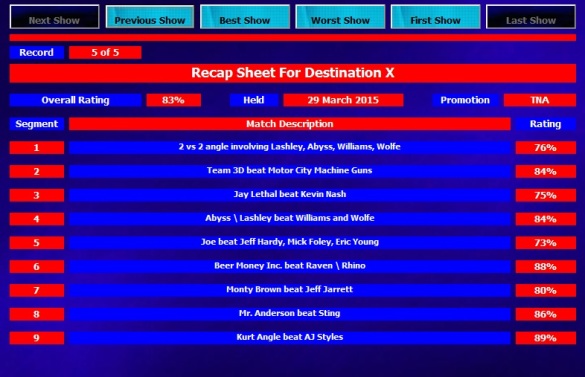 A lot of tag team feuds in the work right now to kick things off. Just to have a look at what I’ve got to work with. I’ve got two prolific tag teams to work with which excites me in Team 3D and the Motor City Machine Guns. Team 3D goes over but the Guns attack them post-match as the feud is only just getting started.

Yep. Jay Lethal goes over Kevin Nash at Destination X… I was able to do that! Having Lethal go over Nash is the perfect way to build him up as a shock win over Nash should get people’s attention.

This was a very short feud but it had a decent rating. 84% this match got. Abyss and Lashley go over.

These four are all feuding with each other so why not have a four way! Joe wins after choking out Mick Foley to win a TNA World Title shot. He’s not yet cashed in the title shot but I think I’m going to book him in the main event of Lockdown.

Raven, a remnant of the WCW 1998 game, returns to team with Rhino and fight for the tag titles which Beer Money just won. Raven, Rhino, Stevie Richards and Taz are all in a heel stable called the Extreme Coalition and the tag title match ends in a DQ win for the champs after Stevie and Taz interfere. The stable stands tall at the end. 88% from this awesome tag team match!

Monty Brown returns to TNA to get a clean victory over Jeff Jarrett.

Mr Anderson turned heel after losing a match to Sting on Impact, attacking the Stinger after calling him out. In this match, Anderson picked up the win after putting his foot on the ropes for the pin. Really ecstatic about this feud and great ratings so far. However, Sting making himself a non-wrestler really does mess up my plans for them. -.-

Similar to the Steve Austin/Kurt Angle 2001 Summerslam ending… Angle has AJ beat a number of times but the ref’s always out or something. AJ eventually low blows Angle for the DQ. 89%… an awesome end to the show.