Previously on the blog, I discussed whether Rob Van Dam or Chris Jericho were ever the “one” in WWE. This came after Triple H cut a promo on Daniel Bryan about why he would never be a star in WWE. Triple H said…

“Here’s the thing, Daniel.  I’ve seen guys like you come and go a million times.  Guys like Jericho, Edge, Rob Van Dam.  All guys that are very talented, don’t get me wrong.  Top guys!  Very popular!  But not ‘the one.’  Never were they ‘the one.’  And maybe nobody wants to say this, but it needs to be said: It’s a fact.  If any of those guys had been the face of the WWE back in the day, we’d all be working for Ted Turner right now.

You think you’re playing in the big leagues, kid?  You have no idea.  You step inside that Hell in a Cell and I have a feeling you’re gonna prove to the world that you’re a B+ player.” 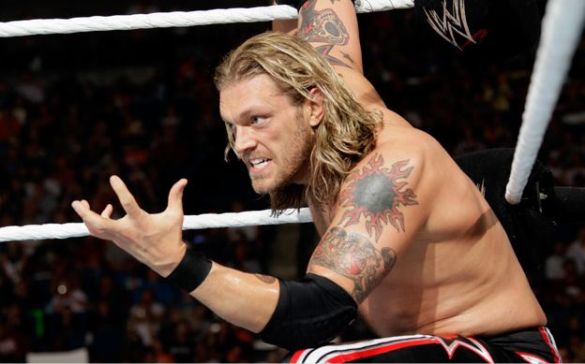 Edge made his mark in WWE by first excelling in the tag team division with his friend Christian. Yes, friend. Not brother, as they were initially promoted as. Edge had developed a strong run as a singles star but was made a true star when battling alongside Christian. The duo would take part in quality matches with the Hardy Boyz and the Dudley Boyz. It soon didn’t take long for the three teams to completely dominate the tag team scene, with all the tag team storylines mostly being centred around them.

However, the tag team eventually had to break up. The two of them were great as a tag team but it was really time for the two of them to develop as singles stars. Edge had been an Intercontinental Champion before but he was more well known for teaming with Christian. Once Christian turned on Edge, both men were able to take off on their own.

Edge would win several singles titles after becoming a singles competitor. His first proper main event exposure came after the WWE Brand Extension. As mention during the Jericho part, Edge really rose to stardom during his program with the King of the World in 2002. This feud was ended abruptly by the decision to move Jericho to RAW. However, Edge was still given many opportunities to shine by SmackDown! head writer Paul Heyman. He main-evented SmackDown! as part of an incredible exciting tag team scenario which helped develop him as a main-eventer. Edge even main-evented WWE’s Rebellion 2002 PPV and challenged Brock Lesnar for the WWE Championship. However, Edge’s roll was cut short by a legitimate neck injury.

Edge would miss a year of television but returned like a house of fire in 2004 as part of the RAW brand. He quickly won the Intercontinental Championship from Randy Orton and he eventually turned his sights onto the World Heavyweight Championship… as a heel. Edge was main-eventing RAW a lot but it was very hard to become a top heel on the brand that was built around Triple H. However, Edge was becoming a star. At Wrestlemania 21, he won the “Money In The Bank” contract which would give him a title shot at any time in the next year. At the 2006 New Year’s Revolution event, with Lita by his side, Edge cashed it in to become WWE Champion for the first time.

This was Edge’s first world title in WWE and it was executed so well. John Cena had been champion since Wrestlemania 21 and it was time for a change of champion. The fans accepted Edge as the man. Triple H had been stuck in feuds with Big Show and Ric Flair, so it was really Edge’s time to shine. It was not like Edge was a ratings-killer either.

The next night on RAW, Edge held a live-sex celebration with Lita on RAW. That episode of RAW was such a success that Edge had delivered a 5.2 rating, which was the highest rated RAW in over a year. It also puts the ratings RAW gets nowadays to shame. The month of January was a month of glory for Edge.

It was also the month where Edge also LOST the title to John Cena at the Royal Rumble. To be fair, Edge never exactly struggled to recover. He stole the show at Wrestlemania 22 with Mick Foley and was WWE Champion again in July. When his feud with John Cena began once again, Edge was again on fire as the top heel in the company. With Triple H being a face now, there was little competition for Edge to compete with. Therefore, he became a feature presentation for RAW. He was still the top main event heel of RAW, even going into Wrestlemania 23.

When he was traded to SmackDown!, he went from strength to strength. It didn’t take long for Edge to become the top heel of the show. Hell, he did it on his first night by winning the World Heavyweight Championship. Again, not a lot of competition for Edge to compete with. That’s especially true considering that the next top heel on SmackDown! was The Great Khali. However, Edge developed himself as the true top star of SmackDown! in 2007 and would be rewarded with a Wrestlemania 24 main event showdown with the Undertaker. This was Edge’s first Wrestlemania main event and what a match it was. Wrestlemania 24 is widely considered as one of the greatest Wrestlemanias of all time. If your match was the show-stealer on a PPV was a strong as a card as Wrestlemania 24 had, you knew it was something special.

Edge stayed as the elite main-eventer on SmackDown! in the next few years. Again, it was an injury that ended his run as King of the Heels. He was injured in July 2009 and CM Punk would end up being the top heel of SmackDown! for a while.

Edge returned as a good guy in 2010, winning the Royal Rumble match upon his return. Edge’s return was a big deal but Edge’s Wrestlemania match wasn’t really considered the main match of the show unlike at Wrestlemania 24. Edge vs Jericho played third-fiddle to Undertaker vs Michaels and Cena vs Batista and it was a period where all the attention was really turned to RAW. Therefore, SmackDown! was starting to truly become second-fiddle RAW which took away from the World Heavyweight Championship match at Wrestlemania 26.

Before he retired, Edge turned heel and face once more but did an incredible job at waving the SmackDown! When he left, he left on top of his game as World Heavyweight Champion. Was he the top guy in WWE? We he ever the one? No. However, I think we can all agree that there was a period in WWE where Edge was truly the star of the show. From 2006 to 2008, Edge was the top heel in the company and definitely one of the biggest talking points in the WWE at the time.